Do you want to capture some of the billions of dollars spent annually by the United States’ 42.13 million teenagers, ages 11-19?

Business owners, community partners, educators and employers seek to capture the attention of teens. Uncovering their motivation includes listening as well as monitoring technology use. Entrepreneur Magazine guest reporter Mercer Hendersen is a successful teenpreneur and shared her preferred platforms to reach teens: Snapchat and Instagram.

“Snapchat is fun, with filters and features from dog ears to geotags,” Henderson wrote. “Brand filters are most likely to be used if they interact with a user’s personality. Instagram has builtin relevancy because what is shared, posted and liked is more lasting than Snapchat. Teens curate feeds to make their personal brand relevant to their followers.”

Break through to your teen market through strategic and compelling posts. You have only 1 or 2 seconds to capture attention.
The value of influencers and advocates evolves over time and can be difficult to track. What is popular today may not be of interest in three months, a fact that is true for most adults, too.

If your business cannot afford to retain the services of an existing influencer, you may cultivate your own advocates and influencers within your geographic niche. 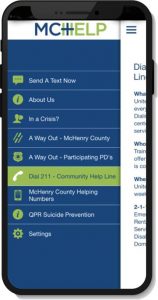 Locally, teens were the target audience for the Text-A-Tip crisis text line in the McHenry County area. The program is known as MCHELP and is a combined effort of McHenry County Mental Health Board, Community Foundation and the former Centegra Health System, now Northwestern Medicine. The purpose is to give teens access, via text, to professional counselors in times of stress, anxiety, depression, fear and crisis.

When adult leaders planned to market the program, they sought focus groups of area high school students. The youngsters were brutally honest and expressed their disdain for the name Text-A-Tip. Students recommended calling it MCHELP, since that’s what adults had been calling the overall project.

“Text-A-Tip sounds like a narc hot line,” students told us. “Students are on Instagram and Snapchat, not Facebook. Don’t waste money on newspaper or billboards; we don’t read them.”

Students enlightened the adults about internal school communications, which may include radio or TV programs, key websites,
links and events. Next, these youths were asked to help communicate the value of the app to their peers. Student clubs developed events such as Download Days to promote the app in their schools.

These young people became the influencers for the MCHELP App, and they’re now committed to making the app important. They influenced their peers while advocating to professionals how best to connect with their demographic.

The Download Days were successful. Fidget spinners with the MCHELP logo were given to those who showed they had the MCHELP app on their phone. Games were used to hook attention and start the conversation. As a result, the MCHELP App was downloaded by many new users.

The app was launched 18 months ago. Download rates are gaining momentum, as are the daily text requests coming from
students in need. The McHELP App provides text and voice access to crisis counselors as well as McHenry County Mental Health resources and 2-1-1 Social Services.

More information about MCHELP can be found at mc708.org or on social media at MCHELP.

Dobbe Marketing is available to you via phone, text, email, FaceTime, Zoom, etc. Contact us in your most convenient manner and we will be ready to work with you to improve your marketing communications!